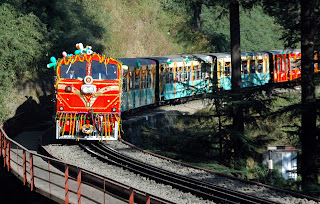 Toy Train: Raising from the elevation of 684 meters to 2195 meters the journey from Kalka to Shimla by the Toy Train has always fascinated the travellers.

The idea of Toy Train had already come to a journalist’s mind in 1847, much before the railways were introduced on Indian land, but after that a number of surveys took place and finally the work was initiated in 1898.

Most of the material was brought from Scotland, the labour was locally hired and the skill full engineers of the British government were always ready to fight the hurdles. With 107 tunnels originally, not 102 are left, nearly 900 bridges, similar number of curves, twenty railway platforms, and the time period taken to complete the project as five years, Kalka Shimla railway is a marvel feet of engineering of Victorian era.

Taste the thrill of himalayas

What is so different about people who live out their dreams